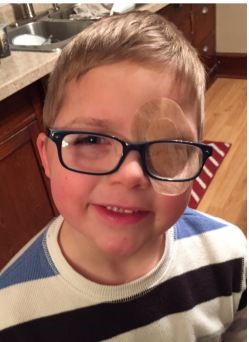 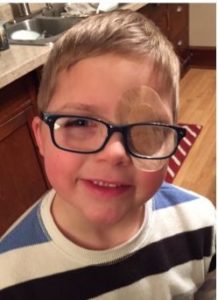 Coleman didn’t know his world was out-of-focus.  It wasn’t until he failed his eye exam during vision screening of his 4K class that his eyes were professionally examined.  As it turns out, Coleman is far-sighted in his left eye and has a severe astigmatism in his right eye.  His eye doctor said we were fortunate to catch this when we did, because there is still hope to strengthen his right eye!  Because of his astigmatism, Coleman will have to wear glasses for the rest of his life.  For now, he is ok with that and LOVES his glasses.  They are the first thing he asks for each morning and tells everyone he can’t see without them!  His world is changed for the better!!  We are patching his left eye for two hours each day for the next six weeks, hoping this will also help strengthen his weaker right eye.  He has tolerated it all with minimal complaints!  He’s been such a trooper and looks adorable in his new SpongeBob glasses!